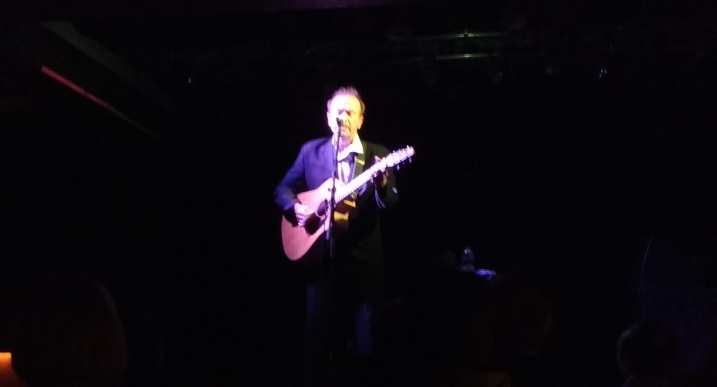 Staying at the Jury’s Inn in the centre of Cork we’ve not far to walk to reach the venue. In fact it’s so close that we stop off at a couple of pubs along the way (rude not to). Having spent the bulk of that day in the delightful Kinsale we were rounding off a perfect day with drinks, food and a Hugh gig.

Arriving at the venue shortly after doors opening at 8pm I find we instantly double the attendance. Heading to the bar for a couple of glasses of wine I’m informed that Hugh would be on at 8.45 and the bar would be closed whilst he was onstage. Fine by me, I’ll get this wine down me then head for another before he hits the stage. 8.45 arrives and there’s no sign off Hugh. On the upside however the crowd has increased dramatically and if everyone was sat down then all seats would be taken. It’s a good solid turn out for a midweek gig with little publicity.

Hugh walks through the crowd and takes to the stage at around 9.10. It’s a similar setlist to what he toured back in Blighty towards the end of last year. I was expecting he would do that not having played this set to the Irish fans (they were in for a treat). The set is a potted history of Stranglers right through to current day solo stuff. He starts with Strange Little Girl and ends with the yet to be recorded Grand Dame (off the forthcoming “Villains” album). The crowd are very receptive and having a good old sing-a-long.

After the gig Hugh fronts the merch stand and is there for any fan who wants to chat. I wait around to have a chat with him and he’s trying to hint for a drink “*clears throat* Ooo I could do with a drink” all fans seem to ignore his repeated calls. “Hugh can I get you a beer?” “Jim! thought you’d never ask” – I grab him an ale (it’s the least I can do) and we have a catch up. Another classic Hugh gig!.

Credit to Mick on the forums for a much better review and setlist
http://www.themeninblack.co.uk/forums/viewtopic.php?f=3&t=21534