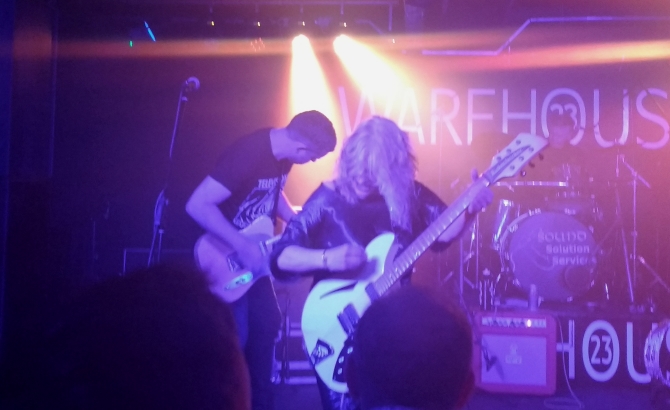 Long Division is in it’s 6th year and the 6th time for me. Every single one of them being incredible value for money and a great mix of bands both young and old.

Arriving at Wakefield station at around 3pm and a quick step next door to the Orangery for wrist bands then greeted by 11 (count them!) ducklings with their mother crossing the road.  Awwwww!

Quick pint in the newly opened Wakefield Beer Exchange and we’re on to the first venue the Snooty Fox (I saw Cowtown play as part of Long Division festival here a couple of years ago).  Mammoth Penguins take to the stage to a packed humid! venue.  “Propped Up” and “Strength in my legs” are the only songs of theirs I’m familiar with but on the whole they’re sounding particularly good live.

Straight out of the Snooty Fox and round the corner to the splendid Wakefield Theatre for Her Name Is Calla.  The theatre seems an ideal venue for them as their lush sweeping songs ring throughout the venue.  The punk in me battles against their songs that seem to weigh in at around 10 mins on average, but there’s a real spirit to their performance only hampered by the occasional crying baby.  Never really witnessed that at a gig before.  One minute a baby is crying to the left of me, the next there’s one wailing at the back of the venue.  On leaving the venue I notice that some band members have brought their babies to work.

We check back in to Wakefield Beer Exchange for some much needed decent ale.  Then we’re on our way to the chapel for Pictish Trail.  The last time I saw them was at a British Sea Power Krankenhaus and they were jolly good fun then.  Today a stripped back Pictish Trail are very entertaining and performing in the chapel adds to the stripped back semi-acoustic performance.   Most pleasant!.

Onto Warehouse 23 and Red Stripe looks like the best of a poor offering at the bar.  We make our way to the front and await the arrival of Bis.  Sadly Bis don’t look in any danger to selling out the venue this evening, which is probably not helped by England’s first game of Euro 2016 taking part at the same time (not to mention Malcolm Middleton and Los Campesinos! taking to the stage at the same time at other venues nearby).  Not to worry, Bis deliver the goods even without their drummer. Faves “This is Fake DIY”, “I’m a Slut”, “Kill yr boyfriend” and “Kandy Pop” (of course) get things moving.

Brother John Robb and his Membranes over at the Unity Hall (witnessed them previously here at Warehouse 23).   Thankfully, the England match on the big screen is firmly switched off to be replaced with celestial imagery to coincide with their recent excellent Dark Matter/Dark Energy album. John and co giving it a high octane performance as usual.

Back to Warehouse 23 to witness the last band of Long Division 2016 and it’s Brix and The Extricated. I’ve seen Brix and co live a fair few times now since they put the band together a few years back and they’re always entertaining. Fall faves with a bit of Adult Net and some new stuff (all sounding incredible, looking forward to the new albums).

The time seems to fly by and before I know it I’m in a taxi home.

All this for less than £25! Long may it continue.