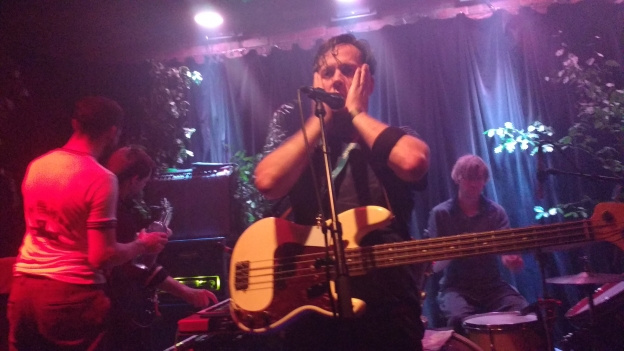 British Sea Power playing a packed sweaty Hebden Bridge Trades Club we’ve been here before right? It had all the ingredients for a classic gig and it didn’t disappoint.

I usually turn up too late for the support band but I made the effort to see Darren Hayman who I’ve caught live a few times before. When we arrive Darren walks past and waves his wristband at my wife thinking she works there as she’s stood near the door waiting for me. Pretty funny. He’s supporting BSP on a few dates promoting his “Thankful Villages” album. Interesting concept, great songs. He ends with the classic “I Know I Fucked Up”.

It’s always a bold move for a band to try out unreleased new material and BSP tonight are testing out 9 new songs. That’s pretty much half the set.

There’s some interesting working titles for the new songs “Barry The Goldfish” to which Yan declares “this one’s about my goldfish”.

The crowd are very receptive considering the setlist but the new songs all sounding really good. If this is anything to go by then the new album is going to be another classic.

There’s enough classics to keep everyone happy.  “Larsen B”, “No Lucifers” and “Mongk” get the crowd moving.

The chaotic “Rock In A” moves us into the encores with “Skua” ending the set.