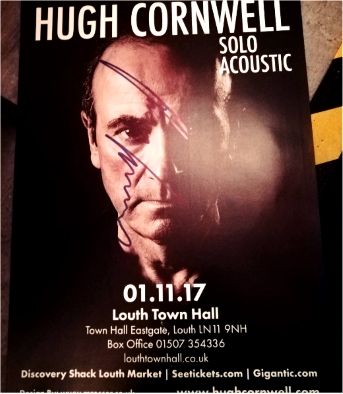 Just collected me thoughts after a mini break part of which took in Hugh at Louth.

I’m pretty familiar with Louth as my wife grew up there and has family there. I’m usually there 4 or 5 times a year. It’s a pretty weird place. Pleasant enough but a bit of a bitch to get to and seems like a place famous people retreat to. You can often see Robert Wyatt drinking coffee in the town square, Barbara Dixon at the Co-op and even Dave Formula in the Brown Cow. Like I say, pretty weird.

Incidentally, Dave Formula promoted a blistering British Sea Power gig at Louth Town hall in the Summer a couple of years back and this is where I return to tonight to see Mr Cornwell. I’m fearing a handful of punters for a dark midweek gig in the middle of no where but as we walk up the stairs and enter the main hall I’m pleasantly surprised to see a 3 quarter full Town Hall. This fills up to almost no seats in the house by the time Hugh enters the stage.

It’s an interesting set. The first half consisting of Hugh’s solo material some of which he’s not played for a few years. Couple of audience members behind me talk throughout until it becomes unbearable “Paul….Paul!!” shouts one pissed up lass to some hippy looking bloke. Myself and a couple near me tell him to pipe down. He gets the message “Fuck this I’m off for a cig” 🙄 He gets up and duly fucks off. A small blemish on an otherwise great first half. I’ve my wife’s family with me who’ve not really heard much Stranglers stuff before let alone Hugh and they’re enjoying it.

An hour later Hugh reappears to give the crowd a blast from the past. It’s a strong set, the sound is perfect (possibly the best I’ve heard him). His guitar and vocals warm and rich. Fantastic effort to all concerned and the man himself. Highlights for me were Henry Moore (good to hear it again), Ships That Pass in the Night (which Hugh announces as like “playing a game of chess”), Big In America (sounding big!). To be honest it’s all good. Can’t wait for the next one which I believe will be around May time. See you then.