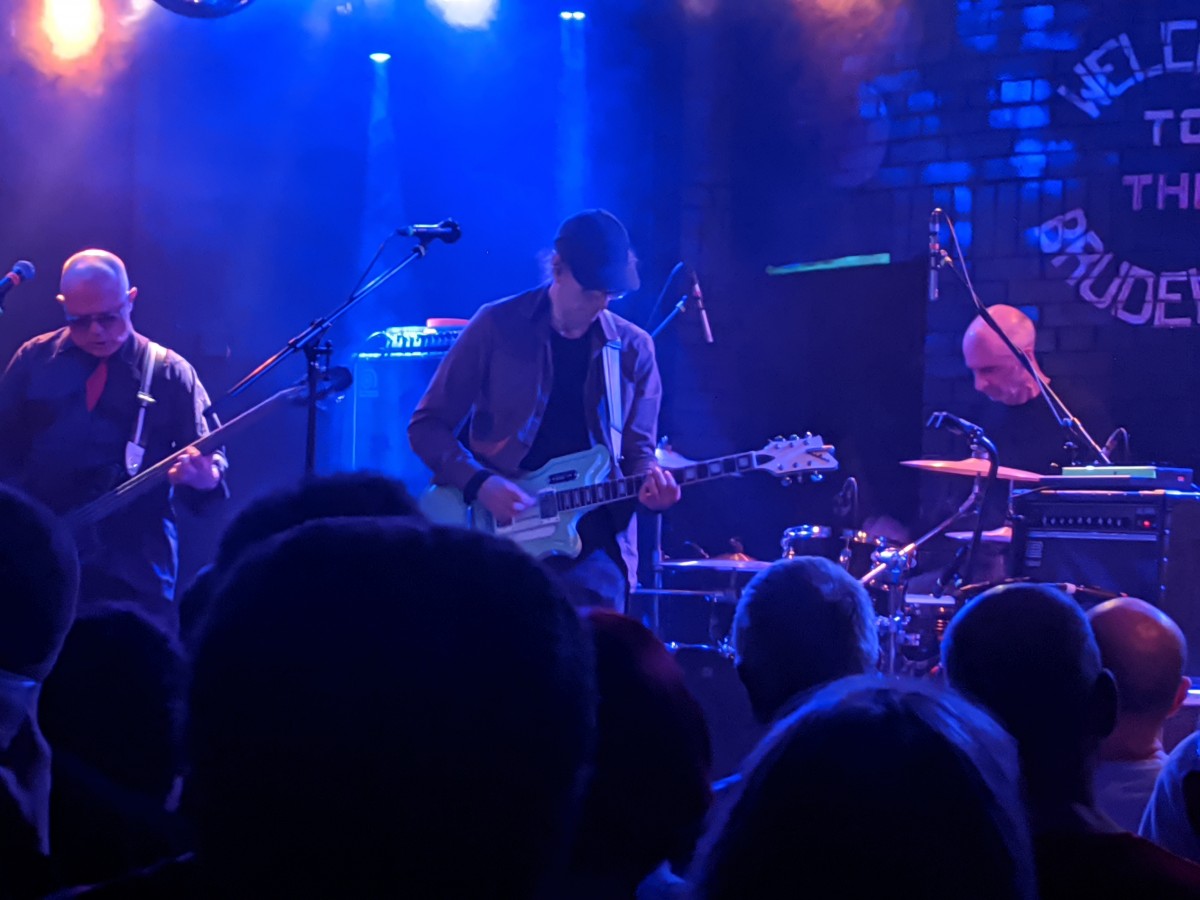 Brudenell fairly recently turned up the Northern social club vibe by selling pie and mash. Not just any old pie of course but a Pieminister pie. It’s not that unbelievable then when I enter the venue, walk into the lounge to grab a pint I spot the whole band sat around one of the tables getting stuck into a round of pies. There’s a few looks amongst the crowd of “is that Wire eating pie?” and yeah it is. So what. Anyway, I look across a little later and noticed the band apart from Graham have left and the support is on. I decide to check out the support…

The support act isn’t your conventional local band trying to gain some new fans. It’s one bloke and his book. I recognised the name when I saw the gig advertised and after googling him I realise he’s the chap who’s currently making the new Wire documentary. Graham has a new book out about some of the gigs and musical moments. Tonight he reads a few sections out. There’s a particularly amusing couple of stories about The Fall and Mark’s TV appearance as God for the show Ideal. I need to get the book.

Having found a nice spot fairly near the front I’m tapped on the shoulder with a very polite “Excuse me, can I get past please?” I look around and it’s Matthew Simms I realise I’m right in the flight path between the stairs and the dressing room. I shift my arse and pat him on the back for good luck. Not that they need it.

The band appear onstage just after 9. The sound mix is fantastic, very clean, Colin’s vocals are high in the mix. I quickly realise that the setlist is something to behold. A decent mix of the often overlooked 80s back catalogue which suits me. The open with “The Offer”, we also get such gems as “Morning Bell”, “It’s A Boy”, “Patterns of Behaviour”. Not quite sure why they seem to be revisiting this era but I’m not complaining, they all sound really fresh and the performance is incredibly tight. I think this could be the best Wire gig I’ve witnessed. We get songs from the excellent new album in the form of “Oklahoma”, “Primed & Ready”, “Be Like Them”.

Finally, we’re offered a rich tapestry of an encore in the form of “Outdoor Miner”!, “Former Airline” and “A Touching Display” and it’s all over. Seems far to quick but the first gig of the year for me is gonna take some beating.