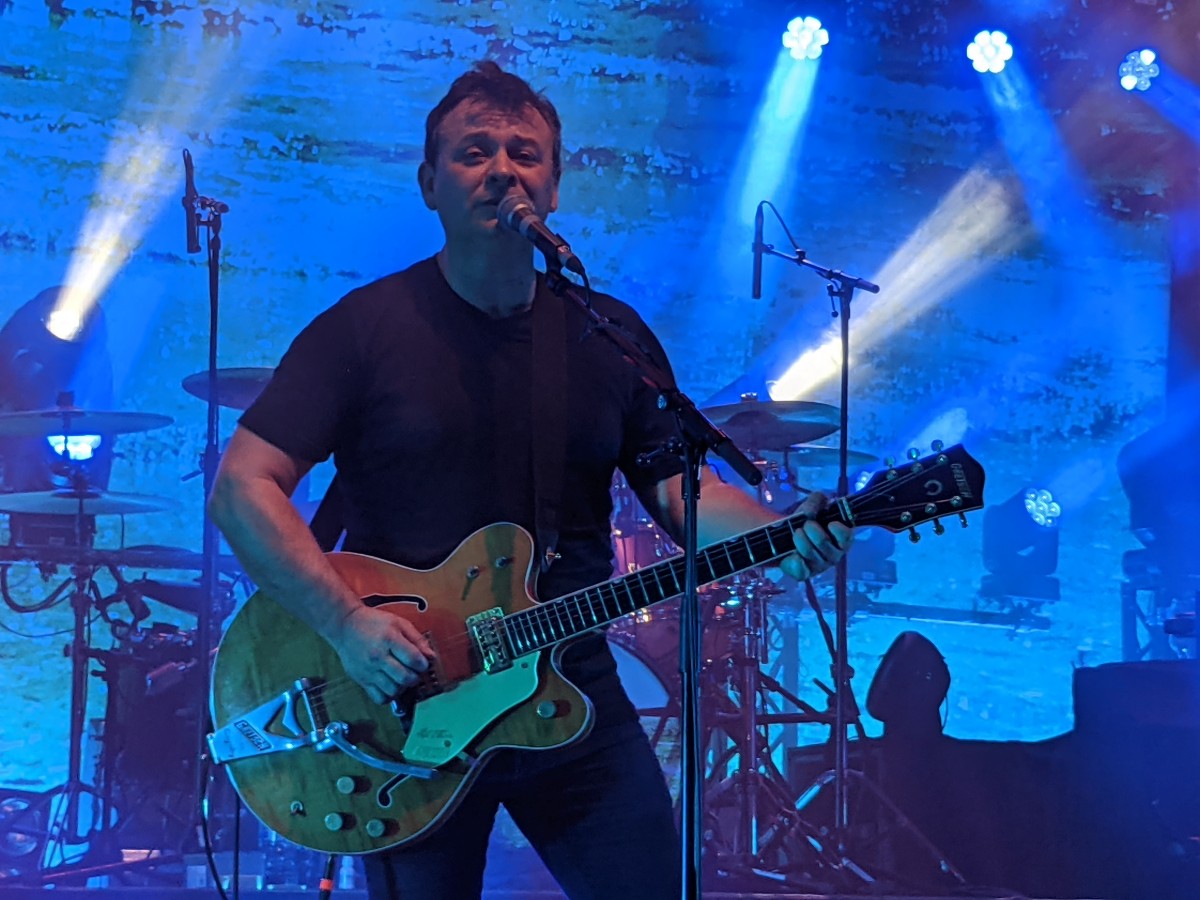 Arriving at the venue around 7.30 in order to catch the support (Low Hummer) I had some trepidation about my first indoor gig post covid. Would their be a reduction on the audience size? (no), would everyone be wearing masks? (no). I guess there’s a point where you just have to get on with it. At least the door staff were pretty rigorous checking that everyone had been double jabbed or proof of a negative test. Although, I’m not sure if they were as rigorous once the queue size grew more than the 20 people that were walking up at 7.30. Anyway in we go…… read more

My first post lockdown gig was a grand event the Manics, Sea Power and Low Hummer all on the bill in the wonderful setting of Halifax’s Piece Hall. read more

Having first seen the Manics 25 years ago at Leeds Town and Country Club (just over the road). I was feeling a little nostalgic and pretty old! Bit of an unusual setlist “Horses Under Starlight”, “Forever Delayed” etc but plenty of classics thrown in. An acoustic “Stay Beautiful” sounding great (if a little nostalgic) with the crowd joining in with the “why don’t you just…FUCK OFF” to which James Dean Bradfield comments “How childish were we?!” very, did we ever grow up?

Having not seen the Manics for a good few years and missing the original Holy Bible tour an opportunity landed my way to get tickets for Wolverhampton and meet up with friends.  A good time was had by all.

The Manics did not disappoint and all the happy-go-lucky tracks from The Holy Bible were performed splendidly including some rarities getting dusted down for the encore.  Managed to get to the front towards the end of the gig and some half decent photos below..

The Manic Street Preachers first gig proper after the disappearance of band member Richey Edwards.  (I think just prior to this gig they did some support thing to The Stone Roses at Wembley)

To be honest I didn’t think they’d continue.  I remember buying the NME around the time and week after week the drama unfolded.  My mate had just passed his driving test and we drove out to Meadowhall (as you do when you’re young and in the North of England).   There was an article with an update on the band in the NME which I bought at one of the many newsagents.  In the car home I flung the paper open and read that they’d decided to continue after writing some new songs that were too good to ignore.

A few weeks later they’d been announced to headline one of the gigs at “Leeds Sound City”.  I somehow managed to bag a ticket to this (they sold out within minutes – mates weren’t so lucky so I was on me own).  It was the turn of Leeds to host the “Sound City” event which meant that the city played host to a number of bands playing the various venues scattered across the city over the course of a couple of days.

On entering the venue I chanced upon Cast who were providing the support.  Although I didn’t really notice if I’m honest (not a fan).  I was on me own so I got chatting to someone who claimed he was the brother of the guitarist (“I like the Manics mate but me brothers band are great”).

In between Cast disappearing and The Manics taking to the stage we were treated to a live link up with the Terrorvision gig which was happening down the road at Leeds Uni. If I recall there were 2 large screens at each side of the stage showing the gig. Most of us were propping up the bar if I’m honest.

Eventually, the Terrorvision footage ends and the Manics appear. Nicky Wire opens with “Thank fuck that’s over!” (or words to that effect) in reference to the end of Terrorvision’s set.

And we’re off. The set wasn’t the standard full gig’s worth due to the festival feel to Sound City and the amount of bands that had been on that day.  But nonetheless we were treated to a Manics greatest hits so far.   “From Despair To Where”, the jangly guitar new one (and unreleased at this stage) “Design For Life”, “Faster” and several other crowd pleasers.  Then it was the turn of new songs taken from the yet to be released “Everything Must Go” album.

Setlist here  – I’d set the tape running to record Radio 1’s live broadcast of the gig and when I got home I was happy to find out the gig had recorded fine.  Still have the tape somewhere.

Not too long after this gig – “Design For Life” was released and this “punk band” were about to go mainstream, which was evident the next time I saw them at Manchester’s Nynex Arena in 1997.

This website uses cookies to improve your experience while you navigate through the website. Out of these, the cookies that are categorized as necessary are stored on your browser as they are essential for the working of basic functionalities of the website. We also use third-party cookies that help us analyze and understand how you use this website. These cookies will be stored in your browser only with your consent. You also have the option to opt-out of these cookies. But opting out of some of these cookies may affect your browsing experience.
Necessary Always Enabled
Necessary cookies are absolutely essential for the website to function properly. This category only includes cookies that ensures basic functionalities and security features of the website. These cookies do not store any personal information.
Non-necessary
Any cookies that may not be particularly necessary for the website to function and is used specifically to collect user personal data via analytics, ads, other embedded contents are termed as non-necessary cookies. It is mandatory to procure user consent prior to running these cookies on your website.
SAVE & ACCEPT
Loading Comments...